Charles Matthew Erhart worked for BofI Federal Bank (BofI) as an internal auditor and sued BofI under the Sarbanes-Oxley Act and other whistleblower protection laws.  Erhart alleged that BofI terminated his employment in retaliation for disclosing to the bank and federal regulators numerous violations of federal and state law.  In particular, Erhart’s whistleblower retaliation complaint alleges that he opposed the bank’s decision to withhold information that was clearly responsive to an SEC subpoena and disclosed improprieties in the CEO’s personal accounts and potential violations of BSA/Know Your Customer rules. Erhart also disclosed information to The New York Times, which resulted in adverse publicity for BofI and substantial decline in BofI’s stock price.

Shortly after Erhart filed his retaliation claim, BofI further retaliated against him by suing him for alleged theft and dissemination of BofI’s confidential information.  In particular, BofI brought claims for (1) breach of contract; (2) conversion; (3) breach of the duty of loyalty; (4) negligence; (5) fraud; (6) violation of the Computer Fraud and Abuse Act; (8) unfair business practices; and (9) other violations of federal and state law.  Erhart’s answer to BofI’s complaint asserts fifty-two affirmative defenses.

In states that have enacted anti-SLAPP laws, whistleblowers should also consider bringing anti-SLAPP motions early in the litigation to dismiss a SLAPP suit and recover fees.  Anti-SLAPP laws provide a procedural remedy to dispose of lawsuits that are brought to chill the valid exercise of constitutional rights, including the rights to free speech and petition the government for redress of grievances.  A March 2018 California Court of Appeals decision in MMM Holdings, Inc. v. Reich is a good illustration of how anti-SLAPP laws are a critical tool in a whistleblower’s arsenal.  A SLAPP suit can also give rise to liability for retaliation.

A whistleblower’s use of confidential company documents to expose fraud or other wrongdoing is a complex issue and the legality of using such documents hinges on several factors, including the factors that determined the outcome in Erhart (the whistleblower acted lawfully in that he obtained the documents in the course of performing his job duties and was careful in selecting the information that he accessed and disclosed to the government).  In contrast, mass downloading of proprietary information beyond the scope of the protected whistleblowing or using privileged information can undermine or potentially gut a whistleblower’s claim.  Prior to taking company documents for any purpose, seek the advice of an experienced attorney.

If a provision in an employment agreement or severance agreement bars you from reporting information to the SEC, that gag clause might be unlawful and unenforceable.  In particular, Rule 21F-17 prohibits companies from using gag clauses in agreements or policies to prevent whistleblowers from providing information to the SEC: “No person may take any action to impede an individual from communicating directly with them Commission staff about a possible securities law violation, including enforcing, or threatening to enforce, a confidentiality agreement . . . with respect to such communications.” Rule 21F-17 is one of the regulations implementing the Dodd-Frank SEC whistleblower reward program.  The SEC has taken enforcement actions to enforce Rule 21F-17. 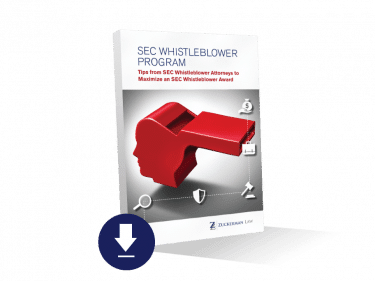 Leading whistleblower law firm Zuckerman Law has written extensively about whistleblower protections and is quoted frequently in the media on this topic. A sample of those blog posts and articles appears below: