The proportion of African-American managers in financial services companies has actually decreased from 2007 to 20015, according to a Government Accountability Office’s (GAO) report released in November 2017.

The report also outlines best practices to help combat the glass ceiling through changes to companies’ recruitment and retention efforts.

HT to Joe Davidson of the Washington Post who covered the report as well.

The GAO found some areas of improvement for overall representation of minorities (Asian, Hispanic, African-American, etc.), including that their presence in “first-, mid-, and senior-level management positions in the financial services industry increased from about 17 percent to 21 percent from 2007 through 2015.”

This increased representation in management, however, varied depending upon the race/ethnicity as well as management level.  For example, as shown by the figure below,

Representation of Specific Races/Ethnicities in Various Management Levels in the Financial Services Industry, 2007 and 2015

Note: The “Other” category includes Native Hawaiian or Pacific Islander, Native American or Alaska Native, and “two or more races.”

Ways to address the continued glass ceiling within financial services

How to address challenges in recruiting diverse talent

To better recruit talented, diverse employees, the report surveyed a variety of sources and identified some practices designed to improve the hiring process in the financial services industry:

Retaining diverse employees and managers is another persistent challenge that must be confronted by companies.  The report suggests the following practices to help with retention: 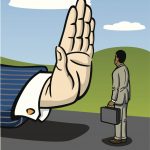 One of the ideas mentioned above is to connect senior managers’ pay to how well they meet the company’s goals on diversity and foster an environment of inclusion.  This same concept has also been touted by Uber in a report by former Attorney General Eric Holder.

And this concept is gaining traction because in the corporate world, few carrots better achieve desired results than money.  Accordingly, the Holder Report suggested, “incorporating ethical business practices, diversity and inclusion, and other values from Uber’s Business Code of Conduct into its executive compensation program.”

Experience shows that compensation provides a powerful tool for creating incentives for behavior, and reinforcing a company’s values. Many leading companies have incorporated similar metrics into the compensation packages for senior executives as a way of ensuring that their compensation practices reward conduct that is consistent with the cultural environment that they hope to create.

Another aspect of the recommendation advised that, “[k]ey members of senior management could be subjected to a probation period during which they must achieve certain minimum levels of performance in order to retain their compensation awards or to continue employment with Uber.”

For many people, money is the ultimate motivator and if Uber and financial services companies can successfully improve their workplace culture by tying diversity and ethical business practices to financial gains, then it will be exciting to see what ripple effects this may cause across corporate America.