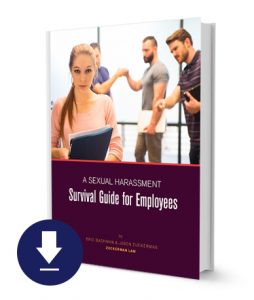 When the media report on workplace sexual harassment issues, they sometimes refer to “quid pro quo” discrimination.  While the approximate translation is “something for something” or “this for that,” a recent federal appellate decision, Jones v. Needham, No. 16-6156, 2017 WL 1959972 (10th Cir. May 12, 2017), sheds additional light on the legal framework of a quid pro quo sexual harassment case.

In Jones v. Needham, the plaintiff is a male employee who claims he was fired because he would not have sex with his female direct supervisor, who was also a shareholder of the business.

In general, two forms of sexual harassment are evaluated by federal courts.  The first is “quid quo pro” harassment where a plaintiff shows that a tangible employment action (for example, termination, demotion, pay cut) “resulted from a refusal to submit to a supervisor’s sexual demands.” Burlington Indus., Inc. v. Ellerth, 524 U.S. 742, 753 (1998).

In Jones v. Needham, the plaintiff alleges a prototypical version of “quid pro quo” harassment:  being fired for not having sex with the boss.

The second is “hostile work environment” harassment, in which conduct that does not result in a tangible employment action is nevertheless so “severe or pervasive” that it creates an abusive working environment. Ellerth, 524 U.S. at 754.

Although these two claims have distinct labels, the federal appellate court in Jones v. Needham noted that the Supreme Court has cautioned that they are not wholly distinct claims. See Ellerth, 524 U.S. at 754.

Rather, they are shorthand descriptors to delineate different ways in which sexual harassment can occur. In the first, the tangible employment action that results from a refusal to submit to a supervisor’s demands “itself constitutes a change in the terms and conditions of employment that is actionable under Title VII.” Jones, 2017 WL 1959972, at *4. In the second, it is the “severe or pervasive” conduct that effectively alters the conditions of employment so as to violate Title VII. See id.

Before filing a lawsuit in federal court, a Title VII plaintiff must first exhaust administrative remedies by filing a charge of discrimination with the Equal Employment Opportunity Commission (EEOC).  Jones,  2017 WL 19459972, at *3.

“[A] plaintiff’s claim in federal court is ‘generally limited by the scope of the administrative investigation that can reasonably be expected to follow the charge of discrimination submitted to the EEOC.”  Id.

Needham Trucking argued that the facts Jones alleged in his EEOC charge were insufficient to put the company on notice of his intent to raise the quid pro quo harassment claim in his federal court complaint.  Id. at *4.

The Tenth Circuit disagreed and found that the terms “quid pro quo” and “hostile work environment” were simply “shorthand descriptors” to differentiate the ways in which sexual workplace harassment can occur.  Id.

If you think you have been sexually harassed at work, it is important to talk with an experienced employment discrimination attorney to protect your legal rights and discuss your options.