The survey results are consistent with an earlier study regarding female scientists about which the Glass Ceiling Discrimination Blog previously posted.

Key findings of the survey

According to the survey’s findings, for women working in STEM jobs, “the workplace is a different, sometimes more hostile environment than the one their male coworkers experience.”  For example, women view discrimination and harassment as happening more often, “and gender is perceived as more of an impediment than an advantage to career success.”

The survey notes that three groups in particular are more likely to perceive workplace discrimination:

The findings are particularly striking for women in STEM who work in mostly male workplaces.  For this group, 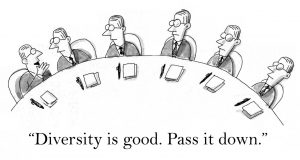 The “concrete ceiling” and intersectional discrimination

It’s often said that a “glass ceiling” exists for women in companies, and for women of color the added layer of race creates a further “concrete ceiling” when it comes to promotions.

This is sometimes referred to as “intersectional” discrimination as well.  According to the Equal Employment Opportunity Commission (EEOC), Title VII of the 1964 Civil Rights Act  “prohibits discrimination not just because of one protected trait (e.g., race), but also because of the intersection of two or more protected bases (e.g., race and sex).”  EEOC Complaint Manual Section 15.  This means that, for example, discrimination against African American women is prohibited “even if the employer does not discriminate against white women or African American men.”

As the author of a different study noted: “Women of color face more obstacles and a steeper path to leadership, from receiving less support from managers to getting promoted more slowly. And this affects how they view the workplace and their opportunities for advancement.”

The Pew survey unfortunately corroborates that a concrete ceiling also exists in STEM fields.  “The survey finds a higher share of blacks in STEM jobs report experiencing any of eight types of racial/ethnic discrimination (62%) than do others in STEM positions (44% of Asians, 42% of Hispanics and just 13% of whites in STEM jobs say this).”  The Pew findings continue that African-American STEM workers “also tend to do so more than blacks in non-STEM jobs (50%), with many saying they have been treated as if they were not competent because of their race or ethnicity.”

About 1 in 5 women say they have been sexually harassed at work, according to the Pew survey. And sexual harassment is both perpetuated by, and helps to reinforce, the glass ceiling.

“As with experience with discrimination, women in STEM jobs who work in majority-male settings and women in computer jobs are particularly likely to say that sexual harassment is at least a small problem where they work,” the Pew survey reported.  “Nearly half (48%) of female STEM workers in majority-male workplaces say that sexual harassment is a problem where they work.”

Another recent study found that more than 70% of women who are harassed at work do not report it.

A variety of factors are at play when it comes to explaining the low numbers of victims who report the harassment, but two big parts of this problem are:

Debating whether the glass ceiling amplifies sexual harassment or vice-versa is a bit like a “chicken or the egg” argument.  But steps can be taken to start addressing both problems in a concrete way.

One idea, which was included in the Uber diversity and harassment report (authored by former Attorney General Eric Holder), its to tie managers’ financial compensation to how well they adhere to diversity and inclusion policies and other ethical business practices.

For many people, money is the ultimate motivator and if Uber successfully improves its workplace culture by tying diversity and ethical business practices to financial gains, then it will be exciting to see what ripple effects this may cause across corporate America.

This concept alone, however, will not be enough and it is important for companies, employee rights groups, and the broader public to keep having this difficult but vital conversation about how to help ensure equal treatment of women in the workplace.

Hiring a proven and effective advocate is critical to obtaining the maximum recovery in a sexual harassment case.  Eric Bachman, Chair of the Firm’s Discrimination Practice, has substantial experience litigating precedent-setting individual and class action discrimination cases.   His wins include a $100 million settlement in a disparate impact Title VII class action and a $16 million class action settlement against a major grocery chain.  Having served as Special Litigation Counsel in the Civil Rights Division of the Department of Justice and as lead or co-counsel in numerous jury trials, Bachman is trial-tested and ready to fight for you to obtain the relief that you deserve.