As a result, the jury awarded Dr. Tudor $1.16 million in damages.

Dr. Tudor is represented by Ezra Young of the Law Office of Ezra Young, Brittany Novotny of the National Litigation Law Group and Marie E. Galindo of The Galindo Law Firm.

According to the complaint, Dr. Tudor is a male-to-female transgender English professor who worked as a tenure track Assistant Professor with the school from 2004 until her termination in 2011.  When she was hired, Dr. Tudor presented as a man and went by a traditionally male name.

Per the complaint, during 2007 and 2008, Dr. Tudor began to present as a woman by “wearing women’s clothing, styling her hair in a feminine manner, and going by the traditionally female name Rachel.”

Dr. Tudor was the first transgender professor ever to work at Southeastern [Oklahoma State University].

After she began presenting as a woman, the complaint asserts that Dr. Tudor was told “she should take safety precautions because some people were openly hostile towards transgender people.”

In 2009, Dr. Tudor applied for tenure and the review committee recommended that she receive tenure.  In early 2010, however, a dean and Vice President of the school rejected the committee’s recommendation and denied tenure to Dr. Tudor with no explanation for the decision, per the complaint.  Dr. Tudor attempted to grieve and appeal the tenure denial and the complaint states that the school failed to follow normal appeal procedures for her appeal.

Ultimately, in April 2010, the President of the school denied Dr. Tudor’s request for tenure, again with no explanation.  Eventually, the school explained that Dr. Tudor did not receive tenure because she was supposedly deficient in the areas of “research/scholarship” and “university service.”  As alleged in the complaint, Dr. Tudor’s qualifications were “comparable, if not superior to, the qualifications of at least three other similarly-situated, non-transgender English professors who were considered for, and received, tenure during Dr. Tudor’s time” at the school.

In late 2010, the school refused to allow Dr. Tudor to re-apply for promotion and tenure because doing so was not in the “best interests of the university.” 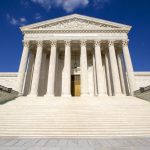 Dr. Tudor move to intervene (join) the case in May 2015 and filed a separate complaint that, among other things, also claimed that the school subjected her to a hostile work environment.

The DOJ’s Civil Rights division reached a settlement with the school in September 2017 and did not participate in the jury trial.

In November 2017, Dr. Tudor and Southeastern Oklahoma State University tried the case before a jury, which found in favor of Dr. Tudor on the discrimination and retaliation claims related to the tenure denial, but not the hostile work environment claim.

It is unclear what specific damages the $1.16 million award is intended to cover, but Title VII does have statutory limits on the amount of money that can be awarded for compensatory and punitive damages.

What is sex stereotyping?

This concept developed in a 1989 Supreme Court decision, Price Waterhouse v. Hopkins, where a woman was denied partnership at Price Waterhouse because she did not conform to traditional female stereotypes. 490 U.S. 228 (1989).  In explaining the legal relevance of sex-stereotyping, the Court stated that “we are beyond the day when an employer could evaluate employees by assuming or insisting that they matched the stereotype associated with their group, for ‘[i]n forbidding employers to discriminate against individuals because of their sex, Congress intended to strike at the entire spectrum of disparate treatment of men and women resulting from sex stereotypes.’” Id. at 251 (alteration in original) (quoting Los Angeles Dep’t of Water & Power v. Manhart, 435 U.S. 702, 707 n.13 (1978)).

In explaining the need for legal recognition of sex-stereotyping, the Court briefly explained: “An employer who objects to aggressiveness in women but whose positions require this trait places women in an intolerable and impermissible catch 22: out of a job if they behave aggressively and out of a job if they do not. Title VII lifts women out of this bind.” (Id.)

Less than a decade later, the Supreme Court handed down Oncale v. Sundowner Offshore Services, Inc., 523 U.S. 75 (1998). The unanimous Court found that “male-on-male sexual harassment in the workplace was assuredly not the principal evil Congress was concerned with when it enacted Title VII.” (Id. at 79.) But the Court continued,

statutory prohibitions often go beyond the principal evil to cover reasonably comparable evils, and it is ultimately the provisions of our laws rather than the principal concerns of our legislators by which we are governed. Title VII prohibits “discriminat[ion] . . . because of . . . sex” in the “terms” or “conditions” of employment. Our holding that this includes sexual harassment must extend to sexual harassment of any kind that meets the statutory requirements.

More recently, the courts of appeals for the First, Sixth, Ninth, and Eleventh Circuits, district courts in the Second, Third, Fourth, Fifth, Sixth, Tenth, Eleventh, and D.C. Circuits, and the EEOC have recognized that transgender individuals’ sex-stereotyping claims constitute claims of sex-based discrimination.